LOUIS LE BROCQUY'S PAINTING A FAMILY, 1951 IS PURCHASED FOR THE NATIONAL GALLERY OF IRELAND. 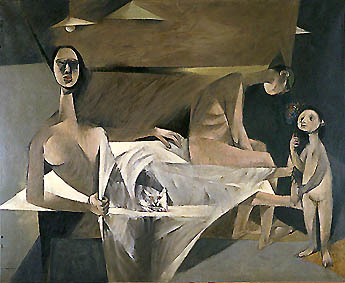 Le Brocquy's painting A Family has returned to Ireland after fifty years abroad in Italy. Awarded a major prize at the Venice Biennale in 1956 and included in the historic exhibition 50 Ans d'Art Moderne in 1958 at the World Fair in Brussels along with work by such artists as Cézanne, Matisse and Malevich, the painting is widely acknowledged as one of the artist's most important works. In a sale brokered by Mark Adams of the London art-dealers Agnew's, the picture has been acquired by the Dublin businessman Lochlann Quinn, who is also Chairman of the Allied Irish Bank, and donated to the National Gallery of Ireland in Dublin, under the Irish Government's scheme for tax relief on donations of objects of historical and cultural pre-eminence. The picture is the first work by a living artist ever to be acquired by the National Gallery of Ireland. It is displayed in the gallery's Millennium Wing which was opened in January 2002 and for which le Brocquy also designed a monumental tapestry. (see section: PUBLIC COMMISSIONS NEWS).

The acquisition of A Family for £1,7 million sterling (US$ 2.4 m / euro 2.75 m) further underlines Le Brocquy's importance in the pantheon of art, setting a new record valuation for an Irish living artist. Indeed, among living British artists, only Lucian Freud and David Hockney have achieved prices above £1 million for a single picture. The former record for le Brocquy's work was £1.15 million sterling (US$ 1.6 m / euro 1.9 m) established at Sotheby's Irish Sale in 2000 for his painting Tinker Woman with Newspaper, 1948. (see section: RECORD AUCTION RESULTS). However, a number of his early pictures have changed hands on the private market at around £1 million, and the price is generally in line with his market.

In 1952 a group of art patrons offered to purchase A Family for £400 and present it to the Municipal Gallery of Modern Art, Dublin, in order to keep the work in the country. The gift was refused by the advisory committee of Dublin Corporation, a decision that sparked widespread controversy and extensive media coverage. Protests were led by the artists Norah McGuiness and Anne Yeats, but the decision stood. Instead the picture was sent for exhibition at the 1956 Venice Biennale, where it was awarded the prize, Premio Acquisito Internationale, and purchased by the Nestlé Corporation for their headquarters in Milan where it hung until 2001.

The Family paintings (c.1951-1954) mark a change in le Brocquy's palette from the comparatively colourful work of the 1940s to predominantly greys, black and white - referred to as his Grey Period. The human presence continues to be depicted, but the images have become starker than in the earlier work. 'When le Brocquy first came to be known as a painter, some thirty years ago, it was not as the civilised head-hunter he has lately become. It was as a story-teller, a symbolist and thoughtful enquirer into the conditions of life. In the early 1950s, above all, he came before us as a man who was looking for the image that would compound all other images. Anyone who was around at that time and concerned with what was called "post-war British art" will remember a painting called A Family, which he painted in 1951.' John Russell, 'Introduction', Dorothy Walker, Louis le Brocquy (Dolmen Press, Dublin 1981)

'His style has developed and changed; his colours are pale and severe - the Family is mostly grey; his forms, in their movement both across and into the picture, are precise. This finesse implies - because le Brocquy's motive is always human - a tenderness which is not sentimental, and a sense of wonder which is exact; one thinks twice about the quite ordinary but in fact miraculous construction of any man's back, having looking at the father in the Family.' John Berger, 'Distinguished Humility', Art News and Review (London, June 1951)

Asked to comment on the work le Brocquy has said:
'I have always been fascinated by the horizontal monumentality of traditional Odalisque painting, the reclining woman depicted voluptuously by one Master after another throughout the history of European art - Titians' Venus of Urbino, Velazquez' Roqueby Venus turning her back on the Spanish Court, Goya's Maja clothed and unclothed, Ingres' Reclining Odalisque in her seraglio and finally the great Olympia of Edouard Manet celebrating his favorite model, Victorine Meurent.
My own painting A Family was conceived in 1950 in very different circumstances in face of the atomic threat, social upheaval and refugees of World War II and its aftermath. The elements in its composition correspond in some ways to those of Olympia, if not to Manet's cool sensuality. The female figure in A Family may be seen to take on a very different significance. The man, replacing Manets black servant with bouquet, sits alone. The bouquet is reduced to a mere wisp held by a child. The Olympian black cat in turn becomes white, ominously emerging from the sheets.
This is how A Family appears to me today. Fifty years ago it was painted while contemplating a human condition stripped back to paleolithic circumstance under the electric light bulbs'.

Calder Publications has produced a special edition of what is described as the most comprehensive collection of Beckett's poetry published to date. The limited edition of 100 copies - 45 for sale in Ireland and 45 in Britain, with 10 hors de commerce - comes with a lithograph print by Louis Le Brocquy of one of his famous Beckett images. Each edition costs '650 and is signed by the artist. The books have been specially bound by Mr Gerard Kenny of the bookshop family in quarter goatskin with raised banks, hand-tooled spine, top-edge gilt, marble board with matching slipcase.
IRELAND COMES TO FRANCE, SUMMER 2000

The hillside village of Carros in the south of France honors two celebrated Irish artists and longtime residents.
Anne Madden and Louis le Brocquy have lived and worked since the early sixties just outside this Mediterranean village near Nice. The opening of the restored castle - newly converted into an International Contemporary Art Centre by the local authorities - was the occasion of the unveiling of a Salle d'Honneur dedicated to both Louis le Brocquy and his wife the artist Anne Madden, in recognition of their involvement in the artistic life of the region.

Le Brocquy has held a number of museum exhibitions in the region, in particular at the Maeght Foundation, and the Picasso Museum, Antibes.

The Maegt Foundation was inaugurated in 1964, by André Malraux, and possesses one of the most important collections in Europe of 20th century paintings and sculptures. A number of le Brocquy's painting are included in the collection in particular Hommage à Entremont, 1968 acknowledged as one of the artist's most important works: See section PAINTINGS/ANCESTRAL. For further details on the museum see: MAEGHT FOUNDATION

The Picasso Museum was inaugurated in 1966, and holds a large collection of works by Picasso who worked there during the summer of 1946. Le Brocquy's work is represented by an Image of Picasso, 1983.