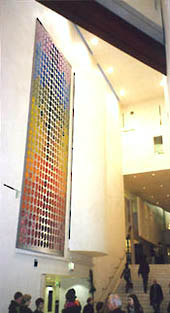 'A gigantic tapestry with a sea of rainbow teardrops hangs to the side, like the building's personally tailored dream coat'. Brtan Lavery, New York Times 31/01/02

'The new Millenium Wing of the National Gallery of Ireland has been praised for its cool elegance. The buffed, plain walls are considerably enlivened by a magnificent tapestry designed by Louis le Brocquy'. Lisa Godson, Sunday Times 17/02/02

An Aubusson tapestry by Louis le Brocquy entitled The Triumph of Cúchulainn, was unveiled in the new Milennium wing of the National Gallery of Ireland, onthe occasion of the opening of the the new 4,000 sq meter wing, designed by award winning architects Benson & Forsyth (Royal Museum of Scotland, in Edinburgh). A portland stone clad modern architectural gem which stands out in contrast to the prevailing Georgian streetscape. Visitors to the Millennium Wing walk in through double doors into an orientation court at entrance level. The décor is solid stone and naturally rendered plaster and from the moment you step inside, the eye is drawn upwards to the natural light, which pervades the upper levels. A note of colour is added by the striking Aubusson tapestry, The Triumph of Cúchulainn by Louis le Brocquy.

The Triumph of Cúchulainn , based on the eighth-century epic the Tain Bo Cuailnge, was commissioned and donated as an integral feature of the new wing by the chairman Mrs Carmel Naughton. It is installed in the reception lobby of the building and hangs from a total height of 14 metres by the modern means of velcro. It represents some 37 sq metres and was woven in the historical region of Aubusson, France by the expert Lissiers and award winning studio, the Atelier René Duché, Meilleur Ouvrier de France. It is the largest single work designed by the artist to date and took some 3400 hours to complete involving four weavers for five months.

Part of the new accommodation in the 'Millennium Wing' includes a suite of galleries dedicated to the permanent collection of Irish art drawn from the first half of the 20th century. The fifth and last bay traces artistic trends in Irish art from 1930 to 1959. Noted works by Louis Le Brocquy - including A Family, see section NEWS - William Scott, Patrick Collins, Gerard Dillon and Colin Middleton demonstrate the variety of artistic activity of the period.

Parallel to his interest in painting, le Brocquy has developed a strong interest in tapestry. In 1948, Edinburgh Tapestry Weavers invited a number of painters then working in London, each to design his first tapestry. The artists included Stanley Spencer, Graham Sutherland and Louis le Brocquy, who produced his now well known work Travellers.. The first weaving of this edition was exhibited by the Arts Council, London in 1950. It made an immediate impression among the critics. This was to be the starting point of a long colaboration with the seventeen century firm Tabard Frères et Soeurs, Aubusson in France. It is remarkable that the considerable reputation acquired by Louis le Brocquy as a designer of tapestries was early on in his career based on seven works. The artist has recently had two exhibitions of his tapestries go on display in Dublin and London, comprising twenty eight designs, resulting from four years of weaving.

The National Gallery of Ireland has unveiled its specially commissioned oil portrait of Bono of the rock-group U2, by Ireland's most important livingpainter,Louis le Brocquy. The painting, entitled Image of Bono, is the fifth in a series of portraits commissioned for the Irish National Portrait Collection. It will be on display to the public from October 21, 2003.

The portrait is not only the most important commission yet for the Irish National Portrait Collection, but represents a remarkable crystallisation of contemporary Irish culture. Le Brocquy's work has defined Irish painting since the 1950s, while Bono is arguably the world's best-known citizen of Ireland. The two men are friends and have been admirers of each other's work for many years.

Referring to his work, Louis le Brocquy says: 'In the past, I have painted an extensive series of interiorised head images of artists such as Samuel Beckett and Francis Bacon, WB Yeats and Seamus Heaney whom I see as extraordinary instances of human consciousness. In more recent years, I have made a number of similar studies of Bono, whose spirit and whose radiant enery I admire so much. But a painting destined for the National Portrait Gallery presents a different chalenge; to make a recognisable image of Bono's outward appearance, while attempting to portray what I conceive to be the wavelengths of his inner dynamism.'

Le Brocquy tapestry unveiled by by the Minister for Arts, Heritage, Gaeltacht and the Islands, Síle de Valera, TD
at RTÉ on December 8, 2000 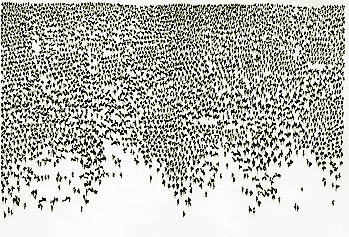 A tapestry by Louis le Brocquy depicting a scene from the great Irish epic, 'Táin Bó Cuailgne', was unveiled in the new Television Programmes Building in RTÉ today by the Minister for Arts, Heritage, Gaeltacht and the Islands, Síle de Valera, TD. The tapestry, measuring 4.45 x 6.83 metres, is entitled 'The Massing of the Armies' and is based on one of a series of images originally created by Louis le Brocquy to illustrate the acclaimed translation by Thomas Kinsella of the 'Táin', which was published in 1969 by the Dolmen Press. The epic tells the story of the Brown Bull of Cooley, a legendary beast which the formidable Queen Medhbh of Connacht wished to acquire as her own. She amassed a great army to come east and take the bull, but they came face to face with one of the greatest figures in Irish mythology, Cúchulainn.

'The Massing of the Armies' was commissioned as an integral feature of the new Programmes Building in accordance with public policy on the commissioning of original works of art for new public buildings. It is installed in the reception lobby. The tapestry shows black figures of men and horses against a white background. It represents some 30 sq metres and was woven in the historical region of Aubusson, France by the expert Lissiers and award winning studio, the Atelier René Duché, Meilleur Ouvrier de France.

Dr Ronald Tallon of Scott Tallon Walker, architects of the award-winning new Television Programmes Building, suggested the tapestry to RTÉ as a Millennium project. Subsequently, RTÉ commissioned it from Louis le Brocquy for the new building. The making of the tapestry in Aubusson will be the subject of a forthcoming television programme by Tommy Gorman, RTÉ's Europe Correspondent. To read more see: RTE PRESS RELEASE 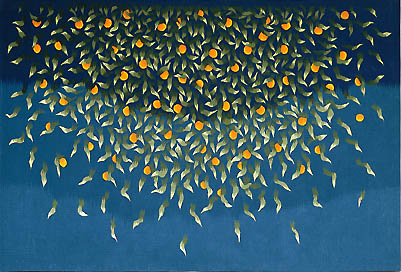 Uccello commissioned by Dr. Ronnie Tallon for A&L Goodbody, Dublin as an integral feature of the new Programmes Building in accordance with public policy on the commissioning of original works of art for new public buildings. It is installed in the reception lobby. Uccello is the artist's first and only tapestry design of the nineties, following the Cúchulainn series of the seventies and the early designs of the fifties. The work represents a total of 13 sq. meters (300 x 420 cm) woven in the historical region of Aubusson, France by the expert Lissiers and award winning studio, the Atelier René Duché, Meilleur Ouvrier de France.

The tapestry also exists in a domestic version woven in Aubusson France, by the Atelier René Duché, in limited editions of nine, and two artist's proofs.

'I have named this tapestry after the great fifteenth century artist, Paolo Di Bono, better known as Uccello, whose amazing Rout of San Romano I have admired since painting first interested me. I am still moved by its then adventurous perception of space and perspective, including that astonishing foreshortened figure lying in full armour under the horses' hooves. But yet another wonder which haunts me in this painting is the recurrent emergence of oranges, appearing like small suns from their dark foliage, very much as I saw them a little later, unbelievably exotic, blazing from their small trees on the sidewalks of the frontier town of Menton in 1939'. Louis le Brocquy, May 1999.